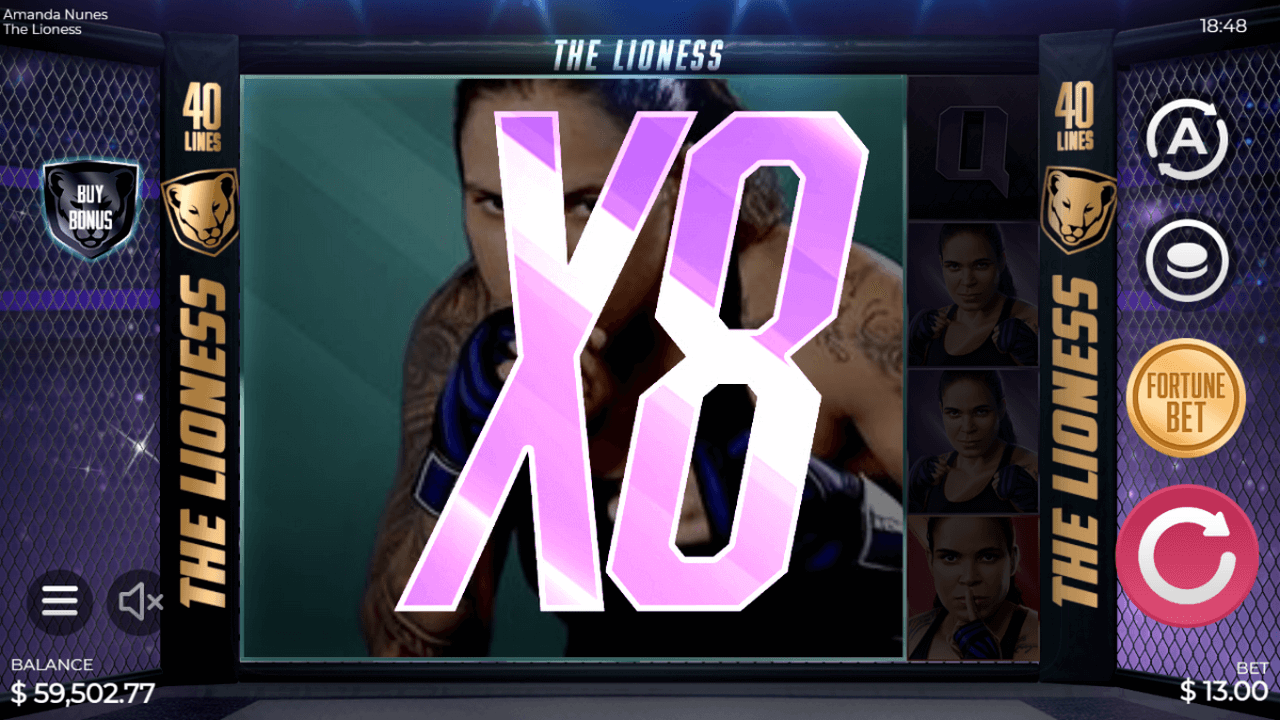 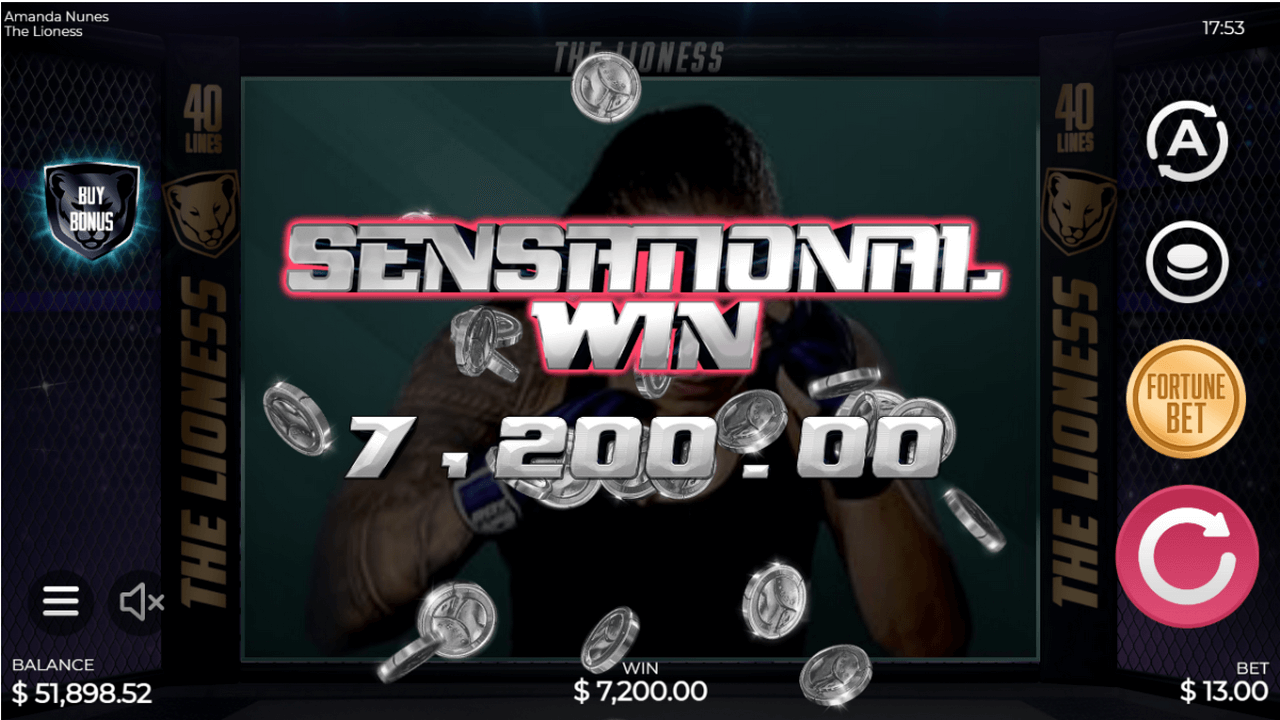 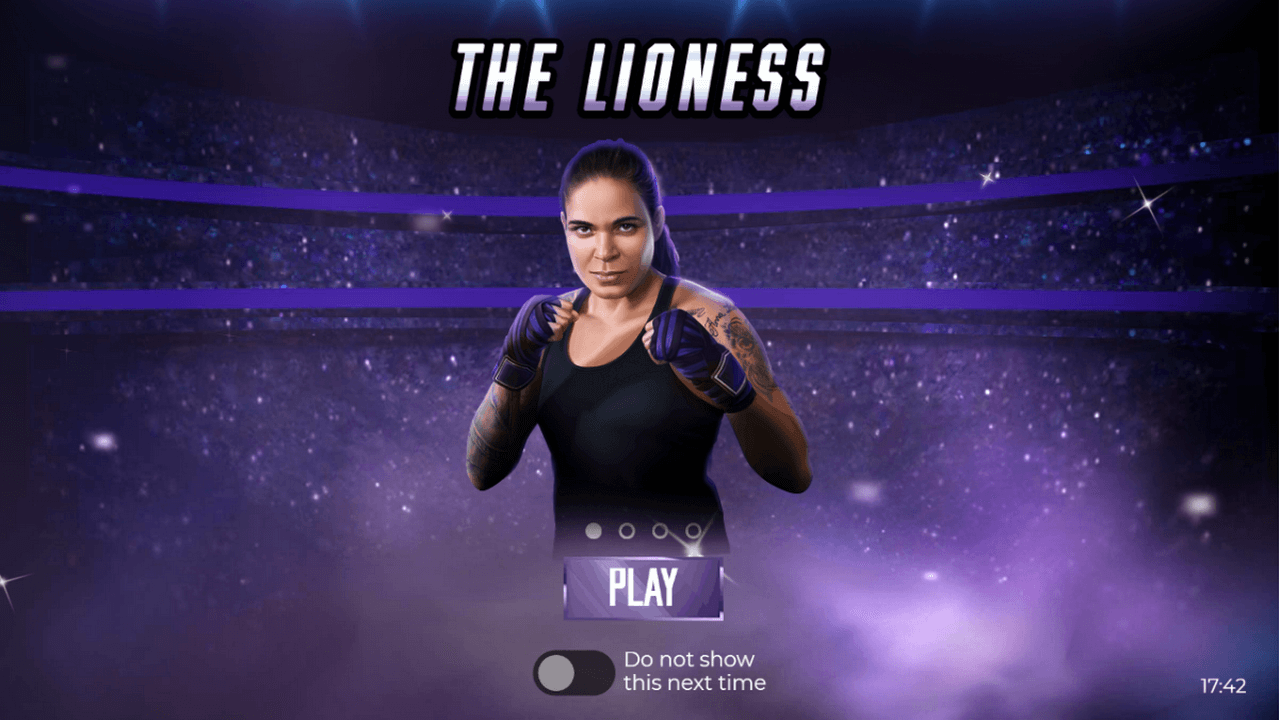 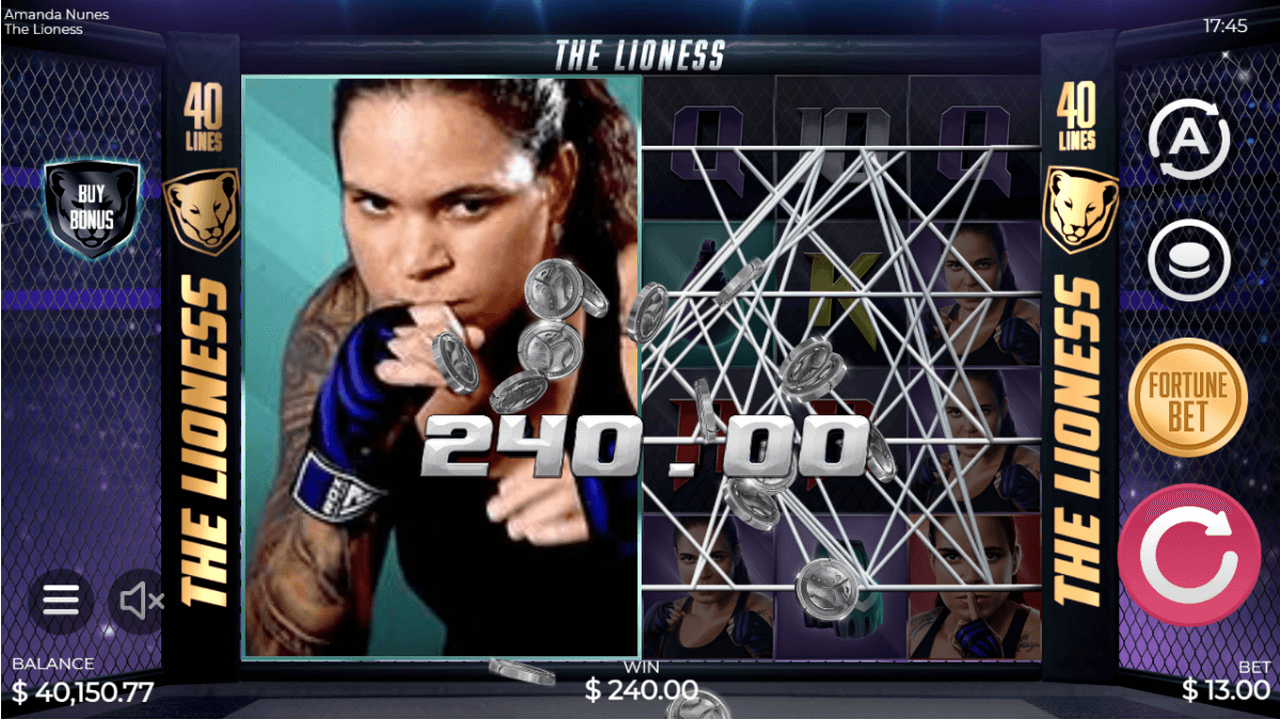 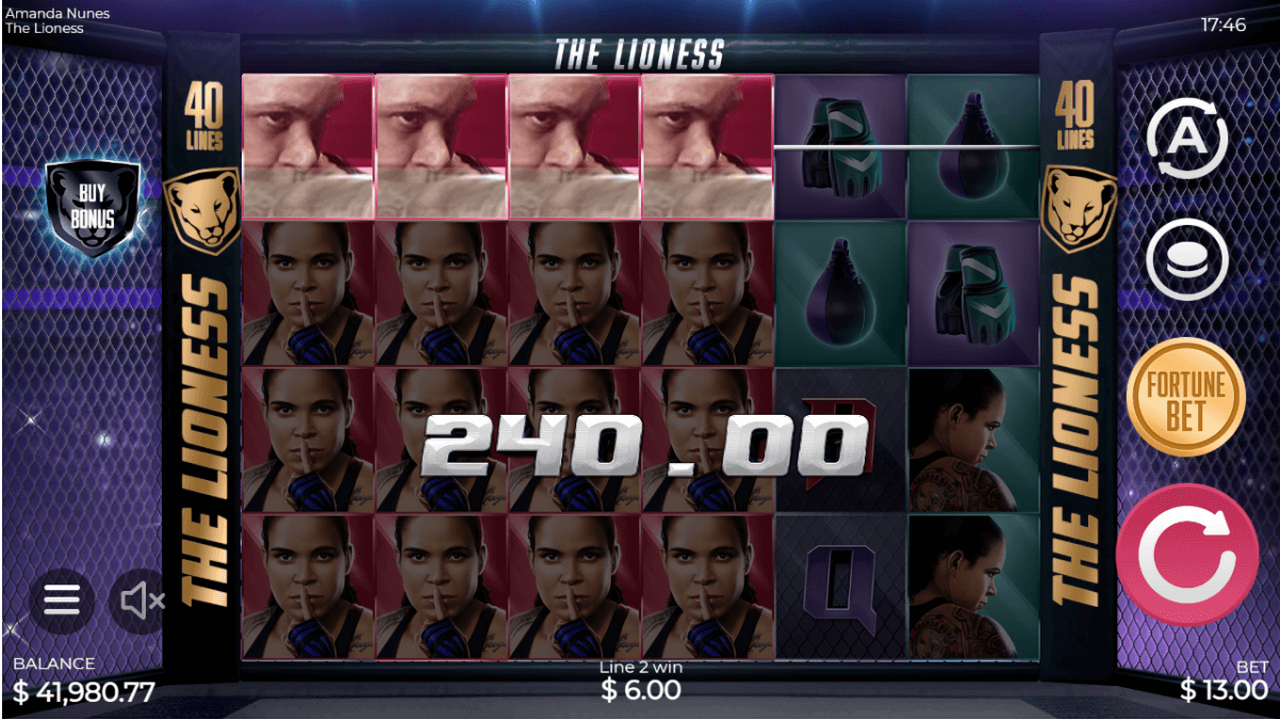 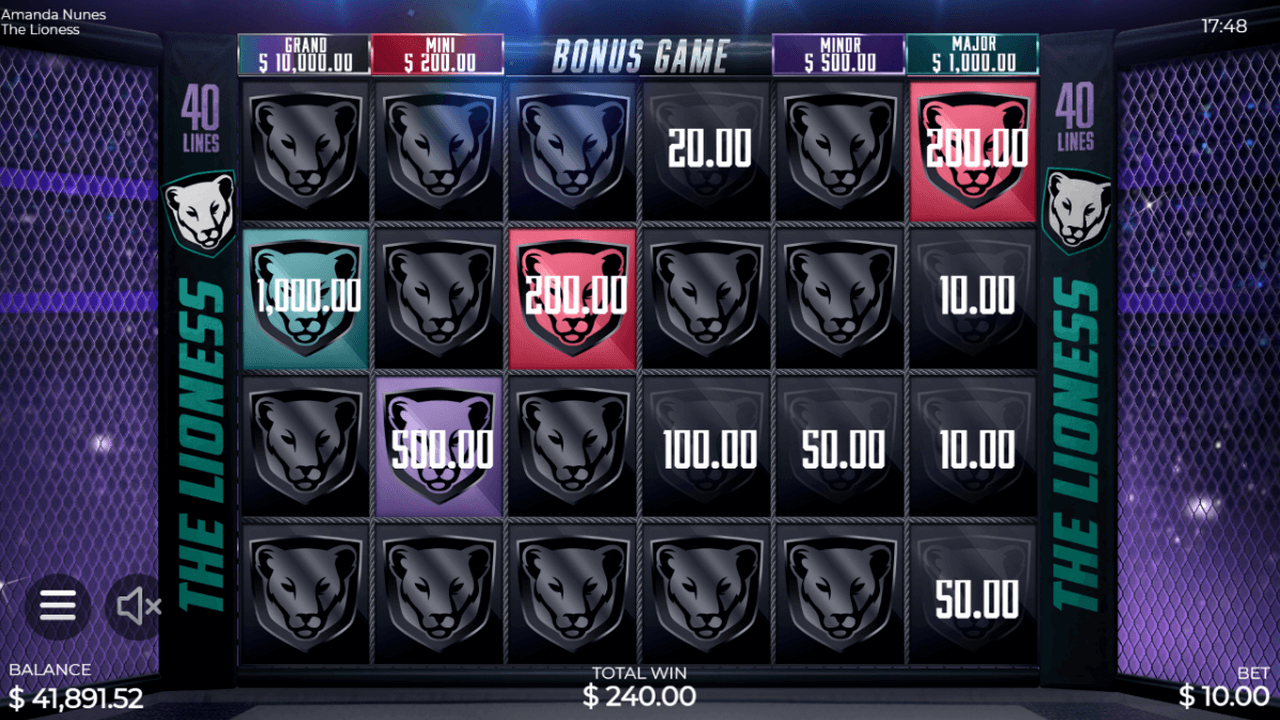 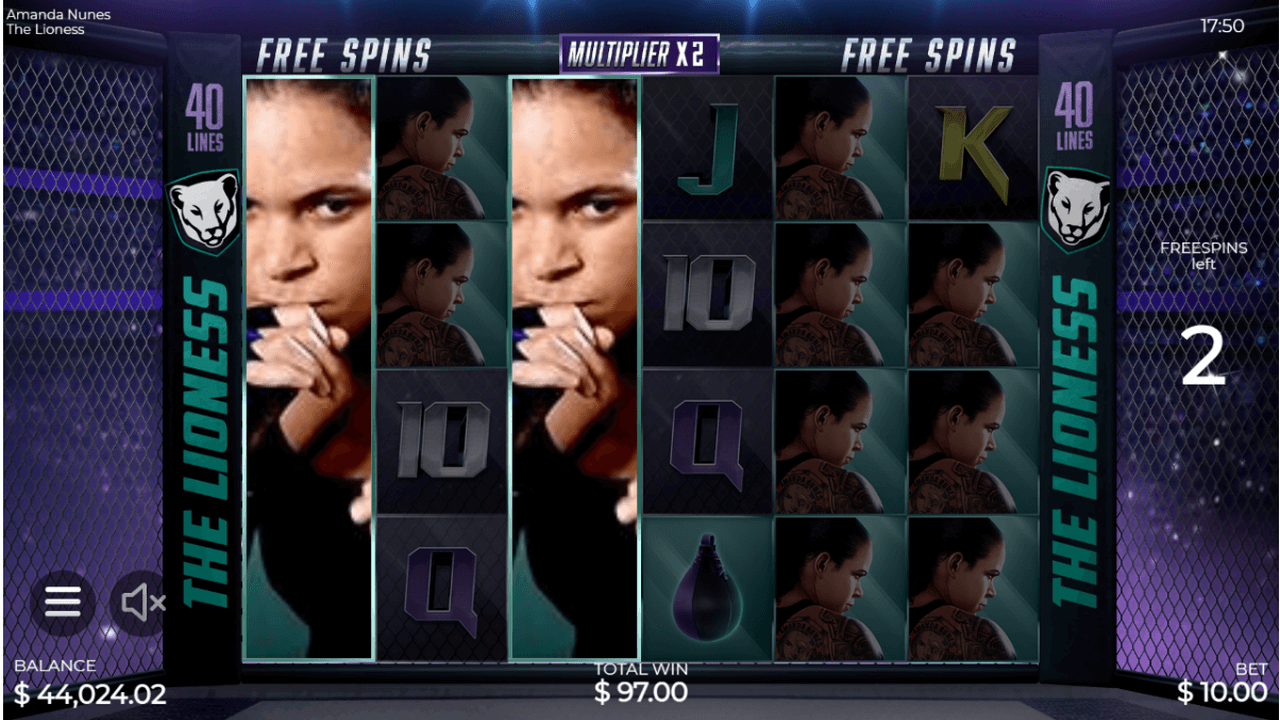 THE LIONESS with Amanda Nunes

Get ready to win with the greatest female MMA fighter of all time!

Our new slot title, THE LIONESS featuring Amanda Nunes, is out NOW! This one-of-a-kind 6 reel by 4 rows, 40-line slot is set to get your blood pumping.

Amanda Nunes made her MMA debut in 2008, and her unlimited ambition, passion, and grit have since propelled her to the very top of the MMA world. Nunes competed in several MMA championships and improved her fighting skills before finally coming to the Ultimate Fighting Championship (UFC) in 2013. ‘The Lioness’, as she ended up being called, set an outstanding 13-1 record since making her debut in the UFC. She also claimed 5 Performance of the Night awards during her career.

In 2016, Amanda Nunes defeated Tate at UFC 200, becoming the bantamweight champion. Then, she defended her title three times in a row before moving up to the featherweight division and knocking out Cris Cyborg in the first round in 2018, officially becoming the very first women’s two division champion.

On Saturday, July 30, 2022, Nunes was crowned victorious once again as the bantamweight champion after a heated fight against Julianna Peña. She took back her belt, proving once again that she is the world’s most skilled female MMA fighter.

Amanda is an ambitious fighter who doesn’t show weakness in her matches, being one of the best ground wrestlers in MMA, and going toe-to-toe with the world’s most skilled fighters.

Armadillo Studios aims to capture Amanda Nunes’ successful career by creating an engaging and thrilling slot that will take casino players into the merciless world of MMA fighting.

Witness Amanda’s unlimited ambition, passion, and grit that propelled her to the very top of the MMA world. If you were blown away by her outstanding performance, make sure you check out this premium title.

The Lioness is a fast-paced, 6×4 reels, 40-line slot that brings plenty of exciting and unique features such as the Fight Feature, Fortune Bet, Lioness Link, and Free Spins:

If you are an operator looking to source our content, get in touch now!

Before you try our games, please verify your age. Armadillo Studios adheres to responsable gaming principles. Please confirm you are of legal age to experience our games.